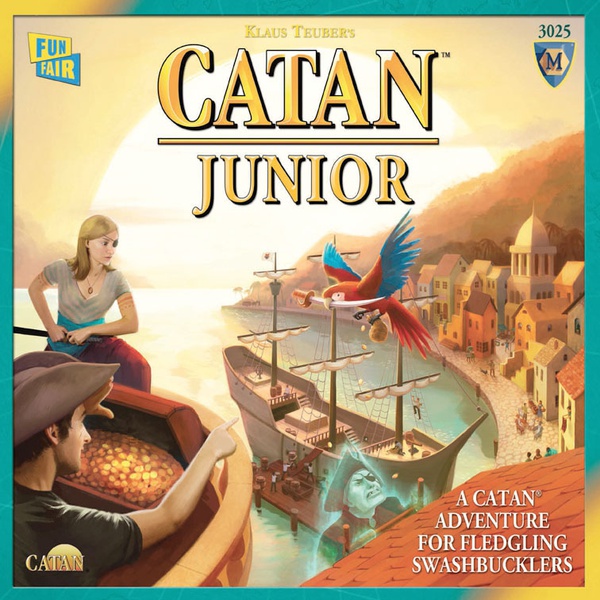 R 749
Out of Stock Ask for details by WhatsApp

Explore the seas! Catan: Junior introduces a modified playing style of the classic Settlers of Catan, giving players as young as five a perfect introduction to the Catan series of games.

Catan: Junior takes place on a ring of islands where 2 to 4 players build hideouts and encounter the mysterious Spooky Island, where the Ghost Captain lives. Each island generates a specific resource: wood, goats, molasses or swords, and players can acquire gold. Each player starts with two pirate hideouts on different islands, and they can use the resources they acquire to build ships, hideouts or get help from Coco the Parrot. By building ships, they can expand their network; the more hideouts they build, the more resources they may receive. Just watch out for the dreaded Ghost Captain!

Be the first player to control seven pirate hideouts, and you win!

What sets this apart from the previous Catan Junior:

This game is playable with two as it comes with a two-player map. The three- and four-player map is larger and is more symmetrical, so that two of the colors don't operate at a disadvantage. The map now shows die faces rather than numbers for resource production.

Many of the event cards have been removed to make the game simpler.
There are no cards in the game only tiles for more durability. There are no longer harbors in the game. In the original game you had to set up the board with random secret harbor tiles that allow for better trades with the bank. Now the trading to the bank is simpler and can be done from the beginning and doesn't require people to build to the harbors.

The resources are different. There is a race for the Coco the Parrot tiles (rather than 'CoCo Helps' cards) and those that have the most get to put an extra piece on the board (one step closer to winning), tied players take their piece off the island and leave it vacated. The market is now a part of the board, and can be traded into only once on your turn By default, Trading with other players is excluded and only part of the "advanced game". In Catan Junior trading with other players could be excluded to simplify the game.