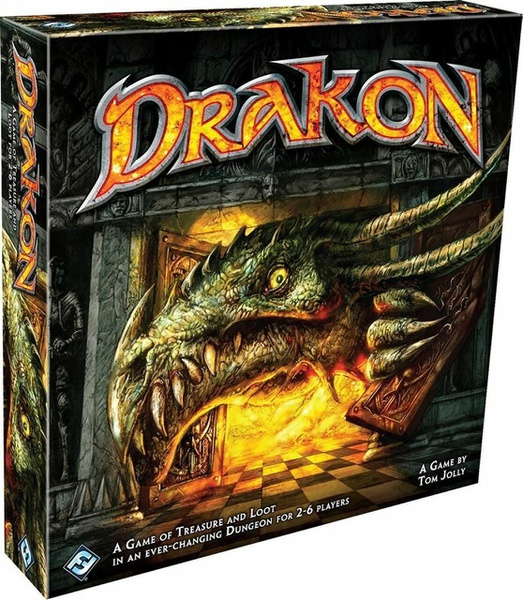 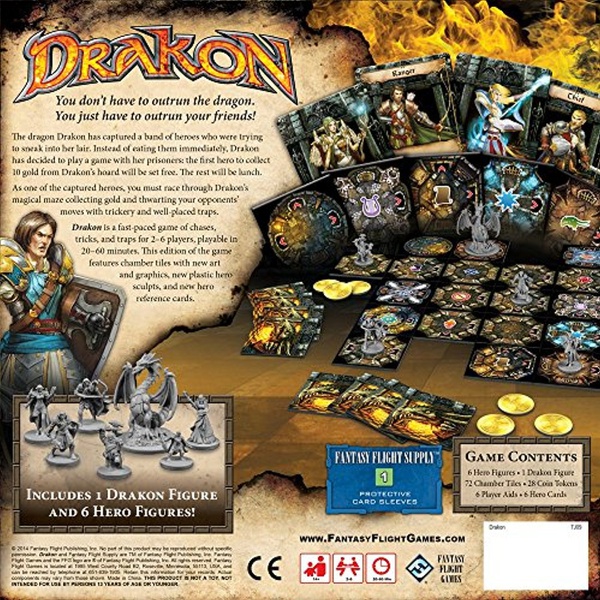 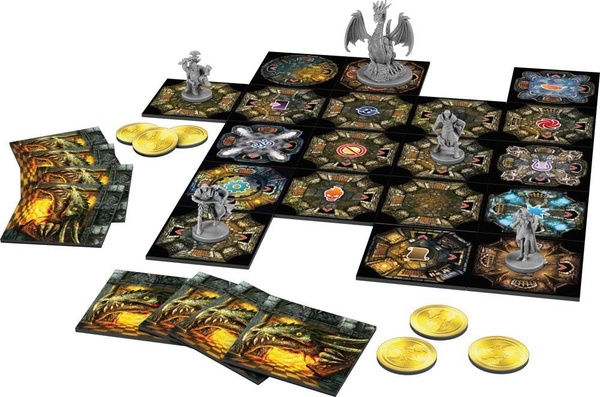 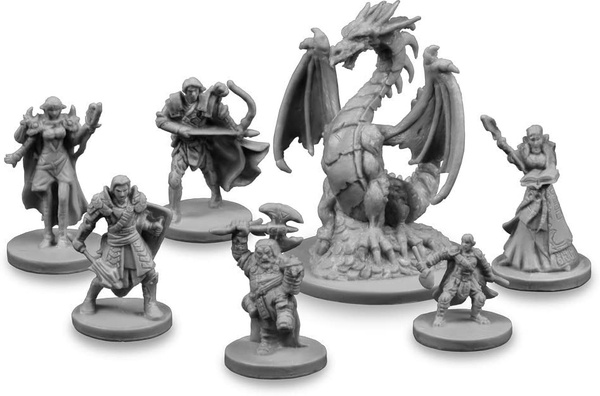 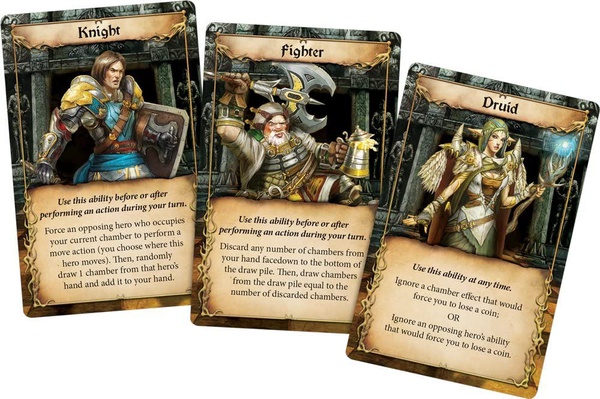 You have been caught looting the hoard of the dreaded Drakon. For such transgression, a fiery death should be the only appropriate response — but Drakon has decided to toy with you before she devours you. You and your rival heroes will each be released into the labyrinth, and the first hero to discover ten gold pieces will go free with his treasure. The rest of you will satisfy the dragon's hunger.

In every game of Drakon, you and your opponents must fight to stay alive in the midst of the labyrinth. On your turn, you can either move your hero to another room, or add another piece to the labyrinth, placing beneficial chambers in your own path and throwing your opponents into harm's way. But you must be cautious. The chambers of Drakon's labyrinth are filled with danger and ancient magics, not to mention the dragon herself. To navigate these deadly corridors and survive, you’ll need to be quick and careful.

On every turn, you have a crucial choice to make. You can either move forward into a new chamber, or you can expand the labyrinth by playing a new chamber tile from your hand. The new chambers that you play feature unique circumstances and magical objects that you may encounter on your adventures through Drakon's lair.

The majority of these chambers offer powerful effects to any hero that enters the chamber. You may gain the power to destroy any chamber in the labyrinth, or call a windstorm to carry you along, increasing your movement. You may even take command of a floating chamber and fly it to the other side of the labyrinth. Other chambers force more harmful effects on those heroes unlucky enough to enter. A room may cause you to lose a coin as you avoid the dangers within, and any hero who hears the siren song of the magical harp is forced to move into its chamber. As you and your fellow heroes play these chambers from your hand, they form a cunning maze, and only the wise can find their way out.

Despite the power of these chambers, the central goal of your quest is to find gold: only by being the first player to claim ten gold can you escape the dungeon. Plenty of chambers allow you to find a coin or steal a coin from an opponent, but the gold value of coins can vary dramatically. Your most recently stolen coin may have a value of three gold or just one. Because coins are kept face-down, hiding their value, you'll never know exactly how close your opponents are to victory.

Six heroes are trapped within Drakon's sadistic labyrinth, and each hero has his own unique abilities to help him survive. Each ability can only be used once per game though, making the timing of the ability incredibly important. You may play as the sorceress and escape from a most dire situation by passing through a wall. You may play as the thief and collect the gold you need at the most opportune moment by preying on another hero. You may even play as the ranger and use a burst of speed to race across the maze when necessary. No matter which hero you play in a game of Drakon, you'll need to take full advantage of your unique ability at the opportune moment if you want to grab the gold and escape from Drakon's clutches.

Of course, the heroes are not alone in the labyrinth. The legendary dragon also stalks the halls and chambers of the maze, taunting any hero unlucky enough to encounter her. Certain chambers throughout the labyrinth allow you to move Drakon through the dungeon. If you can move Drakon into the same chamber as a hapless hero, that hero is immediately sent back to the entrance chamber and loses three coins, as Drakon toys with him before releasing him once more into the maze.

You and your rival heroes are trapped. Your greatest threat may be Drakon or the other heroes. In this dark labyrinth, only one thing can save you: your own greed. Will you ruthlessly grab gold and undermine your opponent’s schemes before escaping to victory? Or will you fail and become just another meal for the dragon? You decide your fate, but only one hero can escape from Drakon!