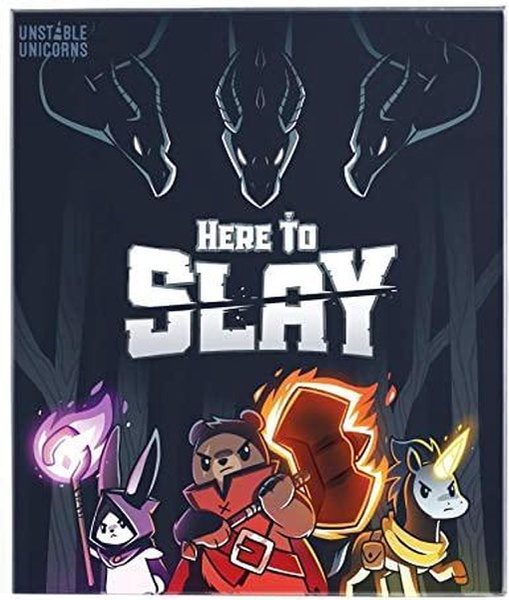 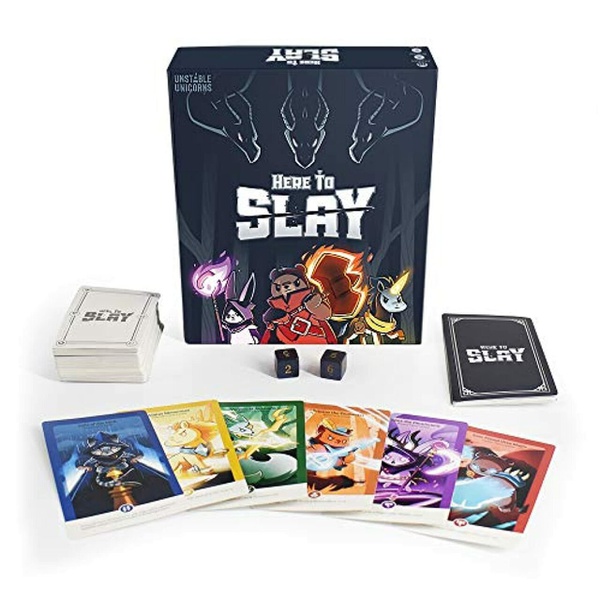 Here to Slay is a competitive role-playing fantasy strategy card game that's all about assembling a party of Heroes and slaying monsters (and sometimes sabotaging your friends too) from the creators of https://www.thebunkergaming.co.za/products/unstable-unicorns/">Unstable Unicorns.

In this game, you’ll assemble a full party of heroes to slay dangerous monsters while working to avoid the sabotage of your foes. The game also includes items you can equip to your heroes, 1V1 challenge cards, and roll modifiers to tip the odds in your favour.

The first person to successfully slay three monsters, or build a full party with six classes, wins the game!

Every player gets to choose a party leader character to represent them throughout the game. Each party leader card has a class and a skill that gives you an edge over your opponents. Whether you enjoy fighters, bards, wizards, or thieves, you'll find a party leader that's right for your play style - but choose wisely, because you only get one party leader for the whole game!

Your heroes are brave adventurers, ready to attack monsters and go head to head with your foes! The game includes over 40 unique heroes. Each hero card has a class and an effect, and each hero’s effect has a roll requirement. In order to use a hero’s effect, you must roll two dice and score equal to or higher than that effect’s roll requirement.

Everyone wants to be a hero, but are you brave enough to face off against these monsters? If you successfully slay three monsters, you win the game, but attacking a monster may come at a price! In order to slay that monster, you must roll two dice and score equal to or higher than that monster’s roll requirement.

Be warned: Each monster has a roll range in which they’ll fight back, and if you score within that range, your party might be in grave danger…

What would this world be without a little magic and mayhem? Magic cards are powerful spells with a one-time effect. Some magic cards can give you great advantages, while others are designed to set your opponents back.

Don't like what your opponent just played? Throw down a challenge! Challenge cards can be played instantly to try to stop another player from playing a hero, item, or magic card. Playing a challenge card initiates a 1V1 challenge in which you and another player both have to roll the dice. If they win the challenge, they still get to play their card, but if you win the challenge, you get to send their card directly to the discard pile!

Only fools rely solely on luck. In this game, you can keep a modifier card up your sleeve (or, well, in your hand) to make sure the odds always tip in your favour. Modifier cards add or subtract from the final total of any dice roll. Whether you need to recover from a low roll or sabotage the high roll of an opponent, modifier cards can be a handy tool when luck doesn't seem to be on your side.