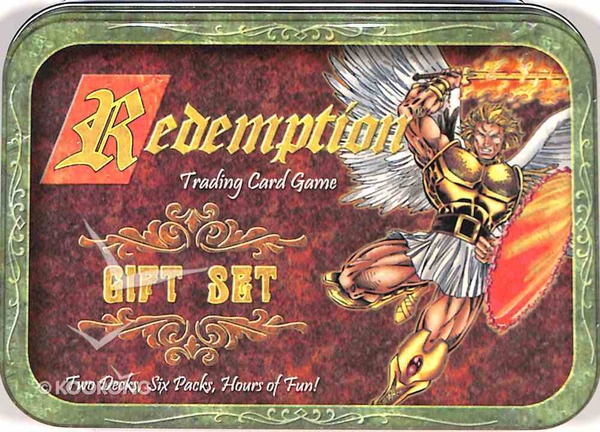 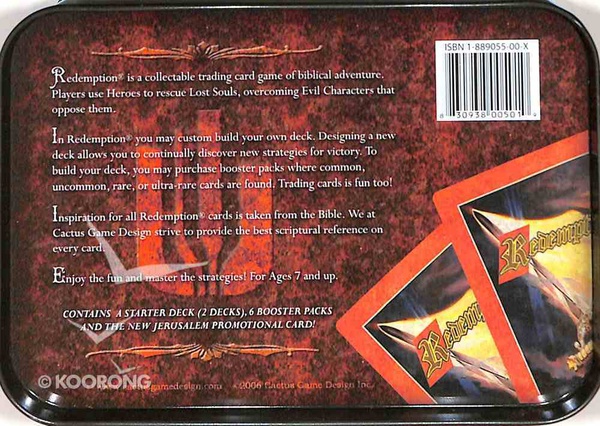 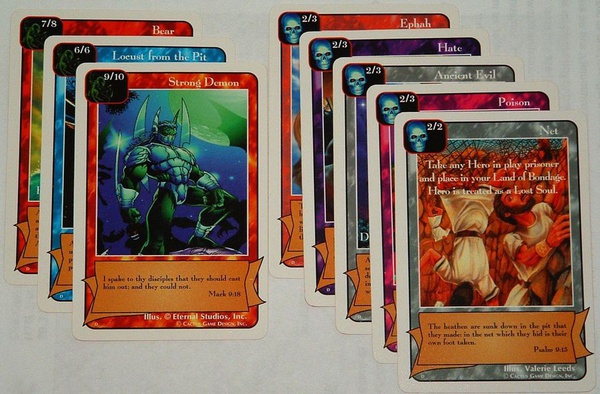 Redemption is one of the few surviving members of the first generation of collectible card games, tracing its roots all the way back to the days of Legend of the Five Rings and Overpower. 13 years after its initial release at Origins '95, the game is in its fourth edition, and boasts ten expansions and a recently-released 10th Anniversary Edition Starter Deck set. Recently, it has also come out with two expansions which were released in tins: Faith of our Fathers (FooF) and Rock of Ages (RoA).

At its core, the gameplay is simple: use your Heroes to rescue Lost Souls from your opponent's Land of Bondage, and use your Evil Characters to defend your own Lost Souls from your opponent. Enhancements may be played on these characters in turn to affect the final outcome of the battle. The characters and enhancements are divided up into colored "brigades" to emphasize theme and maintain variety and balance. The depth of gameplay is expanded with various support cards, such as Sites, Fortresses and Artifacts. Dominant cards may also be played by anybody at any time, and can turn the game around in an instant.

Redemption is unique among its CCG counterparts in several ways. The cards are based on characters, locations and events from the Bible. So while no particular tradition or "brand" of Christianity is emphasized over another, this source material provides a solid theme for the game. Accordingly, many of the cards and their effects bear a historical or thematic parallel to their corresponding Scripture, making Redemption an effective learning tool as well.

Also, while variety and depth of strategy are key factors in developing new expansions, the chance elements of the card draw and Dominant card play are never fully mitigated, allowing younger or less skilled players something of an equalizer. This is consistent with designer Rob Anderson's philosophy that the emphasis be placed on fun and fellowship over pure competition. It is also for this reason that, while tournaments are held regularly, with prizes and ranking points awarded to players who place, those prizes are rather modest compared to those offered by Magic: The Gathering or Pokémon Trading Card Game.