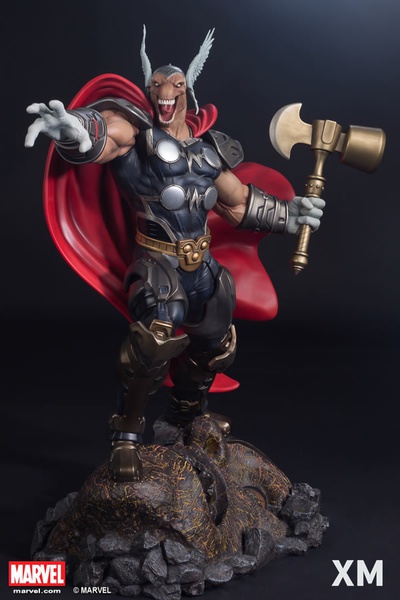 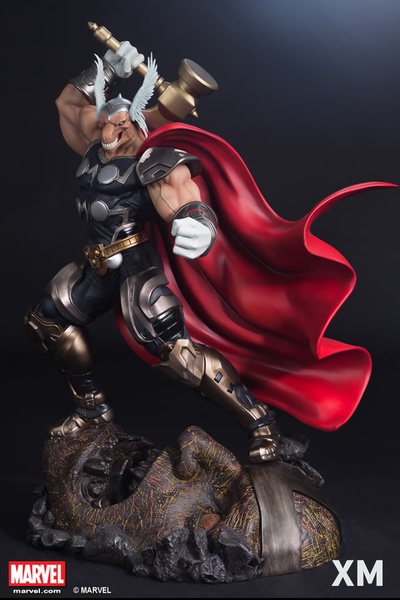 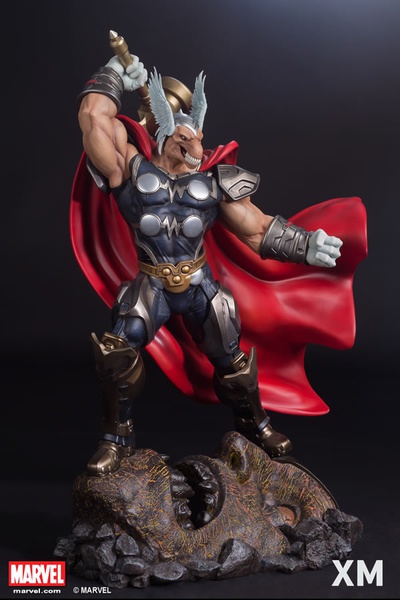 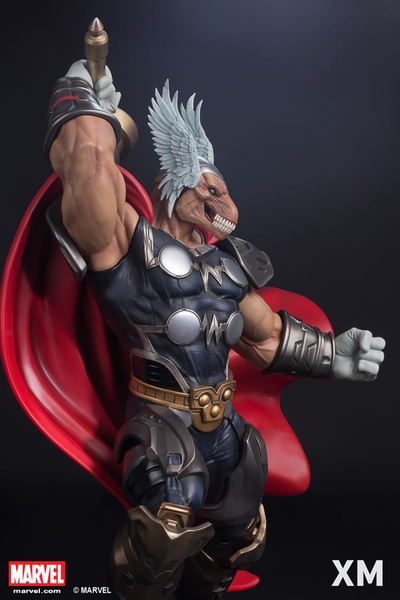 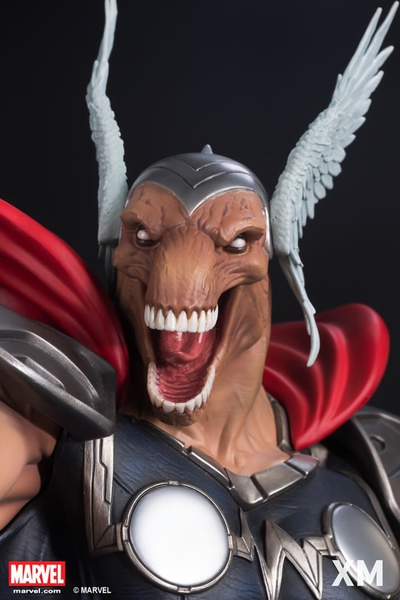 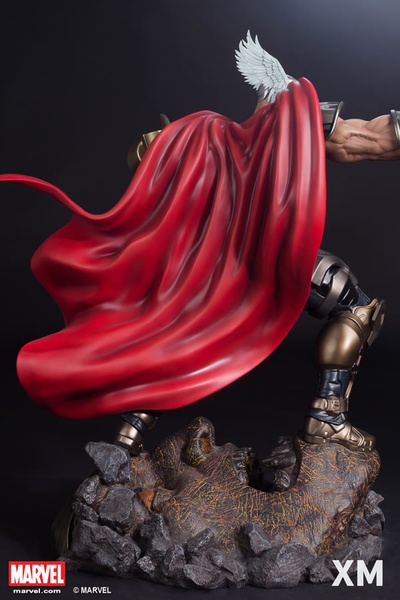 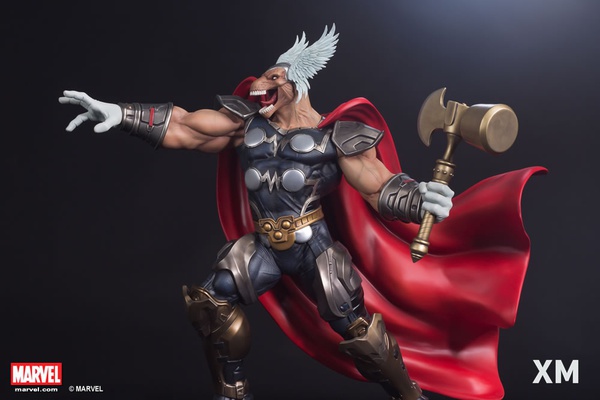 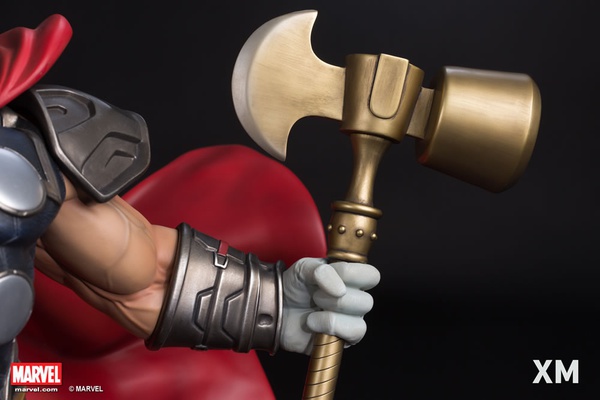 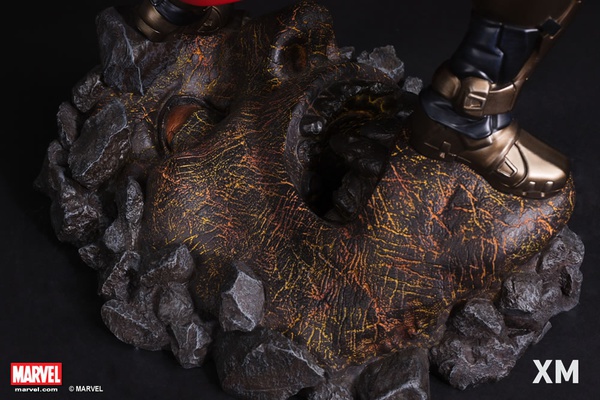 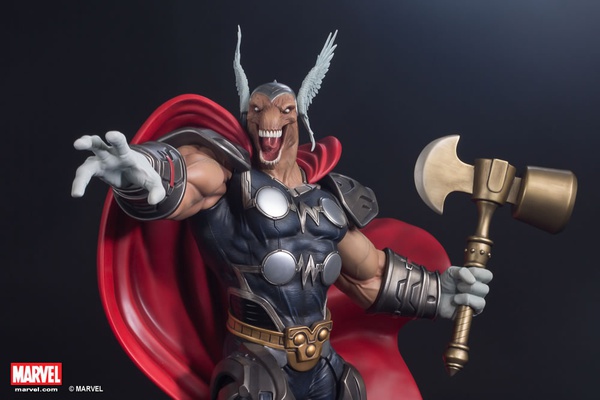 "I AM OATHBROTHER TO THOR, THE GOD OF THUNDER! I CARRY STORMBREAKER, A WEAPON OF GREAT POWER, BLESSED BY ODIN, THE ALL-FATHER!"

XM Studios is excited to present our next Marvel Premium Collectibles series statue, Beta Ray Bill! The cyborg champion of the Korbinites, Beta Ray Bill is immortalized in amazingly detailed 1:4 scale cold-cast porcelain. Each painstakingly handcrafted statue is individually hand-painted with the highest possible quality finish. This massive piece is an incredible companion piece to Thor and the upcoming

The Burning Galaxy was destroyed through the machinations of Surtur. The surviving Korbinites decided to choose a champion who they would follow to their new home. the Korbinite known as Beta Ray Bill was successful and was transformed into a cybernetic being resembling a fierce creature. The Korbinites then amassed their fleet, put themselves into stasis, and followed Beta's ship, Skuttlebutt.

As the fleet approached the Milky Way galaxy, it was detected by a S.H.I.E.L.D. satellite. Nick Fury asked Thor to investigate. Thor was deemed a threat by Skuttlebutt, so Beta fought him. During the battle Thor was separated from his hammer, Mjolnir, and reverted to Donald Blake. Curious, Bill picked up Mjolnir and the hammer deemed him worthy, granting him the power of Thor. Skuttlebutt landed but both were transported to Asgard by Odin.

Odin subsequently decreed the two battle in Skartheim to the death to see who would reclaim the hammer. Bill's Korbinite physiology gave him somewhat of an advantage in the lava-filled realm, and he was able to win. However, he refused to take Thor's life. It is believed that Odin chose this location to further test Bill's worthiness and to teach Thor a lesson. Mjolnir was returned to Thor, with Odin ordering the creation of the hammer Stormbreaker for Bill to use. Bill continued to protect his people and assist the Asgardians. He grew particularly close to Sif, who accompanied him to battle Surtur's demons.